Welcome to my bookish wonderland!

Today I’m going to feature Marsha Ceniceros an author that has written Perçu and Sadana 999. In this post there will be a bio about the author and Sadana 999, an interview and a giveaway! 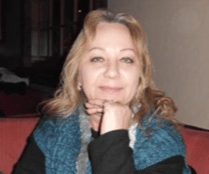 About Marsha Caniceros:
Marsha Ceniceros was born in Indianapolis, Indiana and raised up in Southern California. Her artistic, poetic showmanship has won several awards in the past. Self publishing, Taking The Mind for Ride in 2004, Flames of Torment in 2007.
Life demanded a few years off from writing due to a severe illness, continuing to struggle with recovery after major surgery to remove a tumor, her love for writing refused to give up, passionately writing a bit here and there. From 2008 to 2015, becoming stronger, she completed Perçu, incredible poetry along with a phenomenal masterpiece, Sadana 999. The novel, Sadana 999 is a science fiction suspense thriller, both books are rated five stars from Readersfavorite. com. Currently she is working on another science fiction novel.

About Sadana 999:
Science Fiction Thriller, Sadana 999
There is a secret Military base in Alaska that conducts experiments on Aliens. The base is run by General Ascot who’s also a powerful, cold, and calculating killer and psychopath. Doctor Peru, is the number one Biology and Geneticist expert in the world. He won the Noble prize in year 2714. He is awakened in the early morning hours at his home in Europe by Military personnel and is to be escorted to Alaska immediately. Doctor Peru’s life will change forever and he has no idea what lies ahead.

Arvenig:Tell us a little about yourself and your background!
Marsha: Describing myself, I would say I am a soul with a versatile skill set, I am a poet, author and housewife. Sometime before 1992 I began writing, a lot at that time, I never pursued publishing. Back in 1998, I began taking my love for writing seriously, many of my poems appeared on the internet. I have written poetry upon request for funeral’s and a church along with many personal requests. I kept on writing throughout the years, publishing three poetry books and one novel. The novel, Sadana 999 is a science fiction thriller.

A: When did you first realize you wanted to be a writer?
M: I was in the first grade when our class visited the library, the very first book I read was Green eggs and Ham, by Dr. Seuss, this was like gold to me, and I can honestly say this book inspired my imagination to continue dreaming, where I kept all my books, in my imagination. Eventually as I grew older, the need to write continued, it’s like burning embers, which can flame at any given moment.

A: Is there a message in your book that you want readers to grasp?
M: The imagination is limitless, this will be more than obvious to the reader when they read Sadana 999.

A: What are you working on at the moment?
M: Another mind blowing science fiction suspense thriller, wish I could share, although I can’t at this time.

Thanks for reading and good luck for the giveaway!,

Are you looking for something?

The 5th Wave
by Rick Yancey

The Amazing Book is Not on Fire
by Dan Howell